A question of crisis? 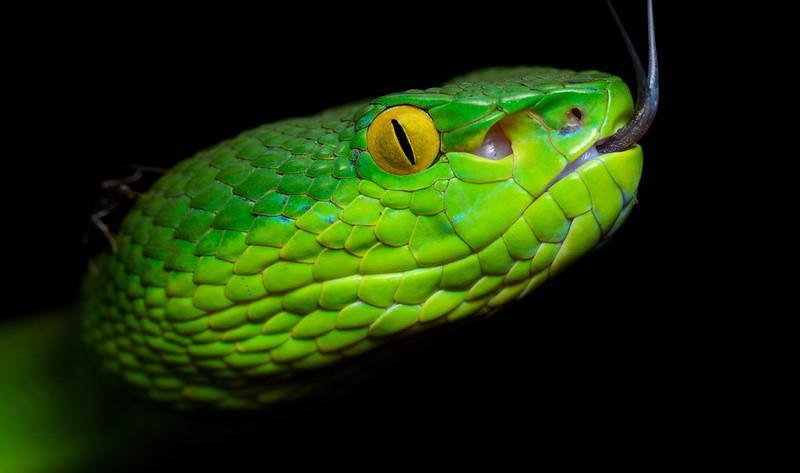 When one is shaking uncontrollably after having taken an unknown quantity of amphetamines, and measures one’s fever by the mL of sweat collected in spare water bottles, and would gladly exchange any brand of power tool for the current jackhammering of one’s skull, certain questions of one’s judgement tend to emerge.

There’s the perennial favourite, a delicious aperitif which no meal would be complete without, “How could things have come to this?”. This is usually followed by the main course, a remorseful “What could I have done differently?”. This can be quite a tough and meaty question requiring a bit of time to chew and digest (Chef’s note: Be warned though filling, in some customers with a predisposed sensitivity and irritable bowels, one tends to shit out recriminations and regrets). Finally onto dessert, the melancholic and pitiful, “Aren’t I a good person?” Though a little heavy, and tending towards the maudlin and saccharine it’s a crowd favourite and really rounds out the philosophical menu. Though the special of the day, well the daily special really, is “Why does this kind of shit keep on happening to me?!!” The chef calls this a culinary tour-de-force which combines the traditional with rich and varied local ingredients. It has a long-standing history on the menu, though some critics have complained in the past that it is old and might even incorporate leftovers.

I made my way through this full course meal since I had little appetite for the more conventional rice overrun with ants, 4 day old meat (which had been butchered even earlier and had bled and sweated in the same painstaking overland journey as I had), and perhaps some kind of grub pulled from a tree, or salad of local greens. However, in contrast to my traditional even-tempered and analytical personality, my current state allowed little time for self-analysis and the inevitable depression which follows. Rather I picked up my camera and on legs trembling as much from weakness as from restless energy I stumbled about looking for something to photograph. That such an ill-advised walkabout could potentially keep me well-fed beyond my current crisis was one of those thoughts which might come back to haunt me, though which garnered disturbingly little attention at the time. “You okay?” Sou asked, by which he really meant, “are you sure you should be up? Sit down before you hurt yourself and have some of this delicious ant rice”. I nodded vigorously, my enthusiasm not exactly compensation in his eyes for my copious sweating, pallor, and trembling. He looked partway between settling back in his hammock and rushing to keep me upright. Comfort prevailed and he settled back down in his hammock, though not before uttering the utterly un-reassuring words, “don’t go far. I maybe need to find you if you sick… again…or you fall down…again. Or if you get hurt”. “Shit, thanks for the reassuring words Sou”, I was thinking to myself before I heard him finish, “Or you die”. I assume this last one was supposed to be a joke though there wasn’t so much as a cracked smile, and the word “death” hung in the air like some clarion call cum classified ad to the nearest grim reaper (“Young man aged 29, sickly state, seeks quick and equitable death. Terms negotiable. Available immediately. Pick up only.”)

The night was cool and I was happy for the blanket of warmth the fever provided (never let it be said I’m not a positivist at heart). A couple hours passed with little to show for my efforts, and disease and fatigue were starting to worm through the veneer of health the drugs had provided. I settled back against a tree to catch my breath and let the wet leaves drape around my neck and shoulders to cool me back down. Then, I took a step closer to answering that classified ad, as that green branch I was leaning against slithered over my shoulder… 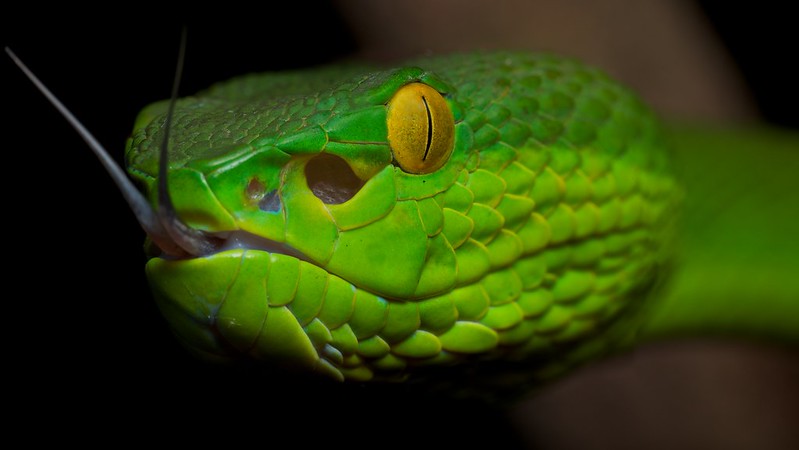 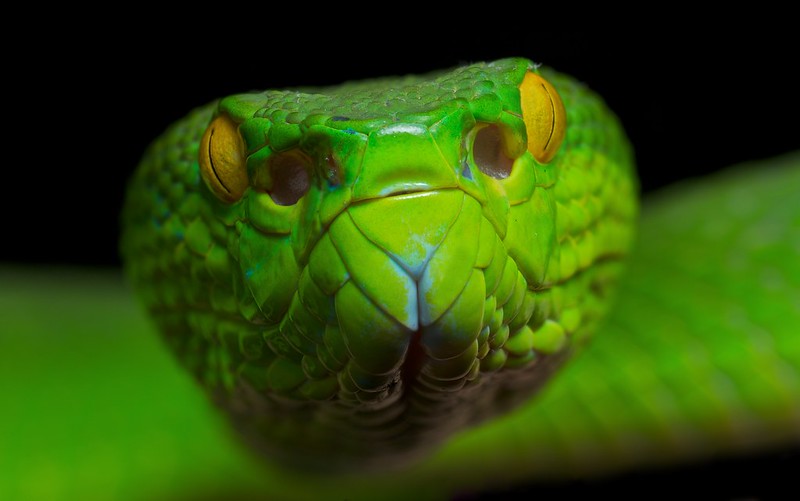 To achieve sufficient depth of field, this photo was a 5 shot stack. Difficult to do hand held when my hands were shaking with adrenaline and amphetamines coursing through my veins. Large-eyed pit viper (Trimeresurus macrops) photographed while sick and delirious in Virachey national park, Cambodia. Copyright Paul Bertner 2013.