Hand-catching a Phantom 3 Professional drone while working with FONAG (A foundation dedicated to the preservation of natural clean water reservoirs) to map the source of the Rio Pita (tributary to Quito’s drinking water) in Cotopaxi national park. Sincholagua volcano in the background. Copyright FONAG 2016.

It’s a common refrain that I tell people that I didn’t think that I would enjoy drone photography quite as much as I do. Now, I find drones to be an indispensable part of my portfolio, and I feel quite out of sorts when I am without one. The increased quality and portability (exemplified by the DJI Mavic line) is making drone photography increasingly accessible. 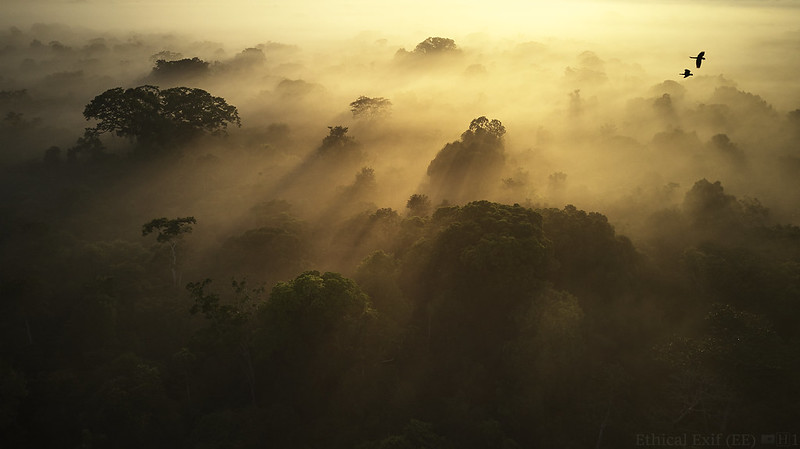 Sunrises are often atmospheric, and a photographer’s favourite. In the Amazon, rainforest transpiration creates a billowing fog over the rainforest canopy, accentuated by increased morning activity by avifauna. Photographed with the DJI Mavic Pro I. Sunrise over Sani lodge, Ecuadorian Amazon. Copyright Paul Bertner 2017.

Traditional reviews like those by “Trusted Reviews” or dpreview are good at pointing out the bullet points and specs that help inform one’s purchasing. They are also updated on a regular basis and can be a source for the most current information. However, it’s always valuable to see not just real-world performance, but performance related to one’s own particular needs. For example, the complex moustache-distortion present in many of DJI’s consumer-level drones is generally not an issue for the majority of photographers, However, those whose purpose is photographing architecture, might find themselves disappointed. It should be noted though that certain points raised by reviewers might be emphasized in a review if for no other reason than to appear thorough and balanced (ie. Justifying the need for the review itself).

The majority of my observations and recommendations pertain to rainforest photography in particular, and extrapolation to other fields is at one’s own discretion (and hazard).

My introduction to UAVs came through the DJI Phantom 3 Pro in 2016. I got roughly 6 months of flying out of the drone before a collision with an overhead tree branch in Ecuador grounded my ambitions, but not before offering a tantalizing taste of the possibilities of aerial photography. I picked myself up (registered anonymously in various drone support groups for pilot victims, this is actually a thing!), and after my confidence was sufficiently massaged back into being, I bought a new pair of wings. I switched to the more portable DJI Mavic Pro. Despite a noticeable step down in terms of quality, it is still an impressive device, and it’s portability ensures that it can thrown in a backpack to be taken along at every occasion, something entirely impossible with the larger series drones (technically I was able to rearrange the padding in my camera bag, a Gura Gear Bataflae 32L to accommodate the P3P, although this is still inconvenient and still requires a hard-case for international or rugged travel), and personally, well-worth the tradeoff. [Nb.The more recently released DJI Mavic Pro II offers important quality upgrades (1″ sensor), and 360° sensor FOV, better radio-connectivity, etc…] 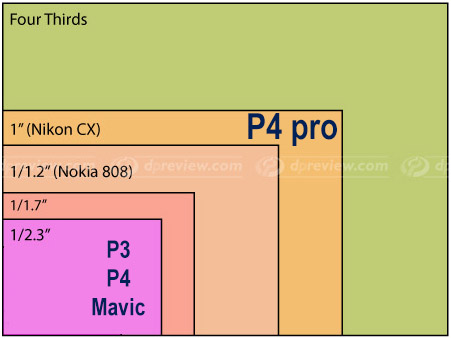 Although drone enthusiasts will downplay the risks, one can say unequivocally that drones are noisy (though they’re getting better), dangerous (the same can be said of any object when dropped from a certain height), and to many, constitute an invasion of privacy. Therefore:

Always carry out your pre-flight checklist (Detailed below)*. It takes only a minute, but it’s a good habit to get into, and can discover chipped propeller blades, compass disequilibrium, memory card absence/failure, etc…

Always carry at least one extra battery. Oftentimes one will have to reconnoitre an area first, or else return prematurely on account of the weather, a crashed app (affecting flight), battery life in either the phone or the remote, or else some other factor beyond prediction.

In the rainforest, the attached gimbal-mounted lens is still subject to fogging, especially in the morning immediately after takeoff as the system warms up. This will immediately frustrate any attempts at capturing that sunrise, and it can be difficult to remove the internal lens fog (which only manifests as soon as the drone has left the ground and internal temperatures rise). Therefore keep your drone, or at least the gimbal/lens dry in a dry-box with silica or some other desiccant when the humidity rises (alternatively you can use a plastic bag with silica/rice and gently wrap it around just the lens, sealing it with cellophane at the top.

Some useful accessories which I use are:

There are a huge number of OEM and 3rd party manufacturer accessories which include everything from propeller guards and multi-bay battery chargers to FPV goggles. and various remote controller mods and upgrades. Apart from the filters, which in my opinion are essential (and very obviously and immediately improve image quality), the other accessories provide a platform for customization, rather than indispensable gains in function.

Perhaps the most obvious benefit and use for a drone is the imaging of large-scale geographical features which are otherwise inaccessible. At these altitudes, one should assume higher wind speeds and lower temperatures, and factor these into one’s risk assessment and battery consumption calculations (in addition to the increased risk of unwanted commercial air traffic).

Headwaters of the Rio Pita at the foot of Sincholagua mountain in Cotopaxi national park, Ecuador. Shot with P3P drone. Copyright Paul Bertner 2016. 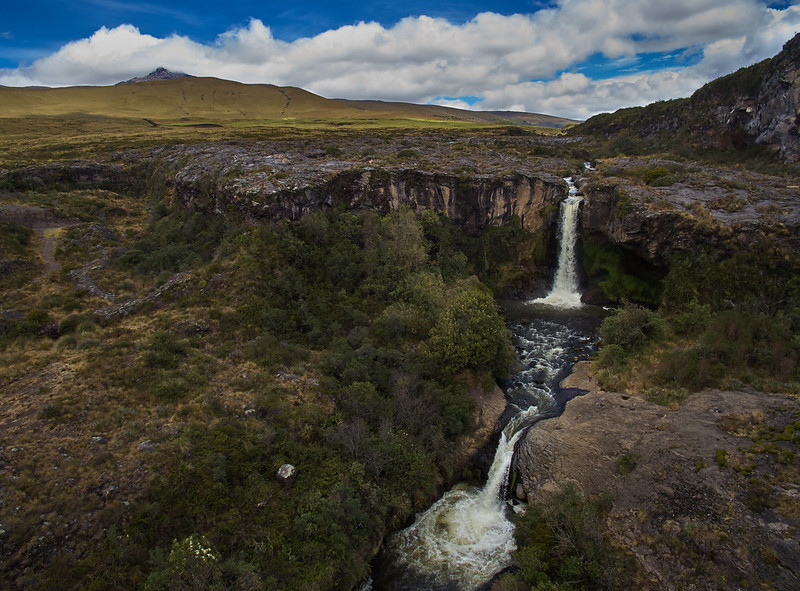 These are dangerous, difficult or physically inaccessible areas. One might not need a wide altitudinal range, but simply take advantage of the drone’s maneuverability and flexibility. Examples include working under the rainforest canopy, around waterfalls or volcanoes/lava flows.

A dense and an extremely mountainous terrain in Sumaco National park, Ecuador. Photographed with the DJI Mavic I Pro. Copyright Paul Bertner 2018.

Sani lodge’s Ceiba Canopy tower, Ecuadorian Amazon. The wide angle of the DJI camera is misleading, since the drone is actually quite close (<5m) from the topmost branches of the Ceiba tree. Photographed with the DJI P3P drone. Copyright Paul Bertner 2017.

BOV obviously overlaps with many other styles, however, the BOV as I am defining it here, refers specifically to the camera oriented straight down. This is particularly effective when accentuated by geometrical shapes, or lines which can create an engaging aesthetic, especially when incorporated into a narrative.

Kayaking in the Brazilian Amazon. Shot with the DJI mavic Pro I. Copyright Paul Bertner 2018. 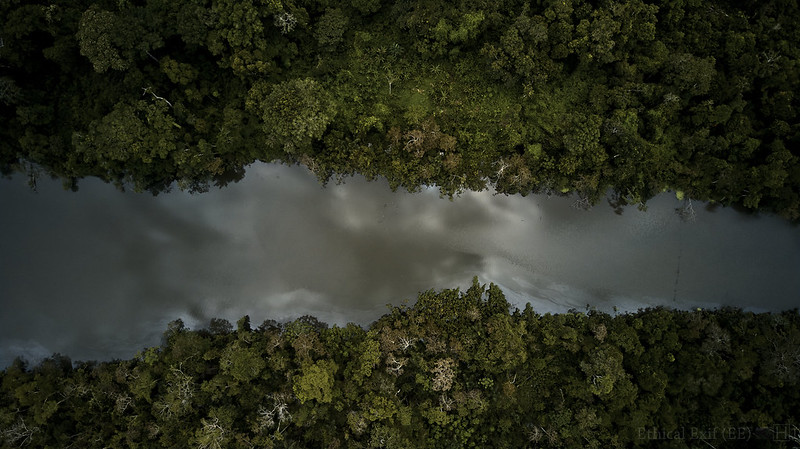 Clouds reflected in the surface of Lago pan on Mocagua island, Colombian Amazon. Shot with the DJI Mavic Pro I. Copyright Paul Bertner 2018.

Compare the style of the next two shots. The first illustrates BOV, whilst the second has a larger angle of incidence.

These shots can provide an escape from landscape-blocking features, to enable impressive vistas. The maneuverability of the drone means that it can be placed into crevasses, across water features, or other dangerous or inaccessible locations. 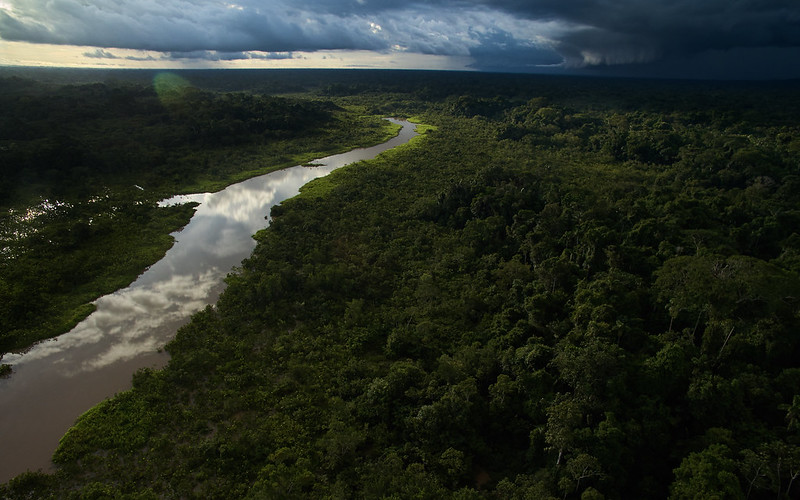 Flying into clouds represents some obvious risks (water/electrical damage and loss of line sight being the most obvious). However, one might judge that the benefits outweigh the risk, as clouds can completely change the framing, and atmosphere of a photo. I often experiment with their incorporation to some extent, whenever they are present, and it makes sense to do so. It’s important to keep a line of sight on the drone, insofar as is possible, in order to determine the cloud type, to have an exit strategy in case one loses sight and or control of the drone, and to respond to features in the landscape obscured by the cloud cover.

The clouds don’t necessarily have to be at camera-level to be effective, as long as the overall effect is immersive.

Due to the curvature of the earth and line-of-sight, the arriving or retreating sun can be observed at higher altitudes before/after conventional ground-based photography (a point seldom accounted for by landscape photographers).

Sunrise in the rainforest is a great time to fly, and low-lying mists over the canopy add to the atmosphere.

Golden hours still apply to drone photos, though be careful of the level of flare which can sometimes overcome the photo. Shot with the DJI Mavic Pro I drone. Photo from leticia, Colombia. Copyright Paul Bertner 2017.

Sunrises are generally handled better than sunsets by the smaller sensor drones. They start to show significant noise at anything higher than base ISO 100, and don’t handle highlight/shadow recovery in post-processing particularly well either.

Despite drones being equipped with flashing LED safety lights, and being very capable of flying at night, the sensor size in most consumer models is generally too small to meet a minimum quality standard. Below is a blue hour shot, taken just after sunset.

This doesn’t necessarily represent a distinct style, but rather, is contextual and fits into the accompanying narrative. The more specific and focussed the photo, the greater the effectiveness. A generic landscape photo, regardless of the its beauty, is not as effective within the narrative as one which shows dynamism and can communicate along multiple storylines. Shooting in this manner often requires having a clear story in mind before flying.

“A road runs through it” – Yotoco reserve is not only bi-sected by a highway, but is flanked on all sides by farmlands. It is a forested island, rich with interesting species, however, it’s unclear how this ~500 Ha reserve will sustain larger mammalian species in the long-term. Photo from Yotoco reserve, Colombia. Shot with the DJI Mavic Pro I. Copyright Paul Bertner 2018.

If you have any additional drone tips or experiences, I encourage you to leave a comment or PM.