During the day they are at rest and fairly unresponsive. Undoubtedly they possess an interesting physiognomy, often camouflaged as bird droppings or other unpalatable fare and thus suitable for portraiture; however, the real point of interest is their hunting strategy which can only be seen at night. 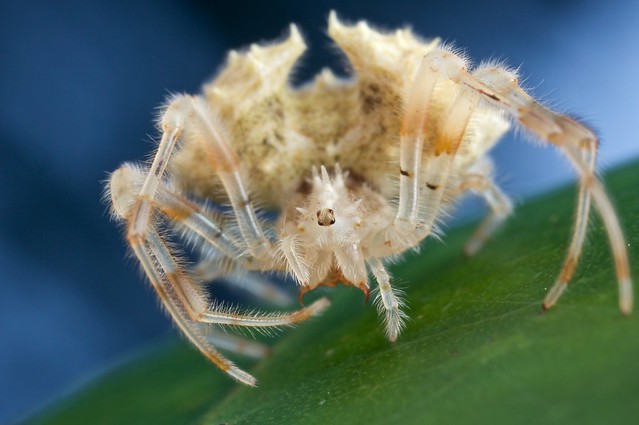 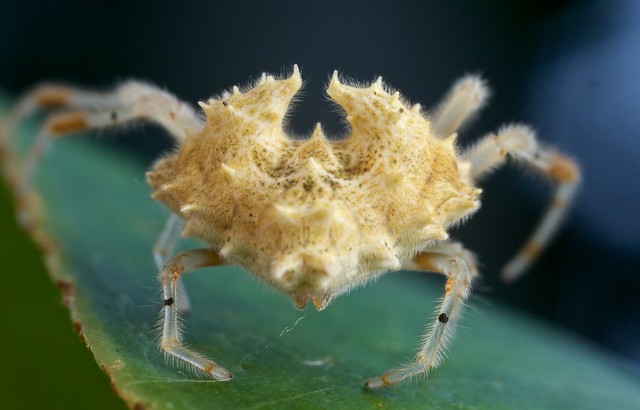 And so, as darkness descends, the bolas spider emerges from its daytime slumber, finds a suitable location free from obstructions and begins to build. It is not a web in any recognizable sense, but rather a single long silken line to which it attaches globule(s) of a glyco-protein glue; together, they form the bolas. The silken line is made of a relatively rigid silk, not like the capture strands of a standard web, but rather like a fishing pole, rather than the line itself. It can bend and has give, but it must provide a frame to support the heavier globules which adhere to it. As the silk is pulled from the spinnerets, it is pulled towards the mouth where the globules are affixed before being lowered to where it rests below the spider’s body. “Each of these globules has a complex internal structure consisting of a mass of curled or folded fibre embedded in a viscid matrix which is in turn surrounded by a less viscous layer. This results in the low viscosity liquid flowing past the moth’s scales to reach the cuticle below, while the more viscous liquid forms a bond to the thread to sustain the moth’s weight. The folded thread inside the ball permits elastic elongations which extend the spider’s striking range”(Unreferenced Wikipedia note).

The exact form of the bolas differs between species, with some species using a single terminal globule attached to the line, while others use interspersed droplets. The line is completed in short order and is then allowed to dangle, or rather angle. 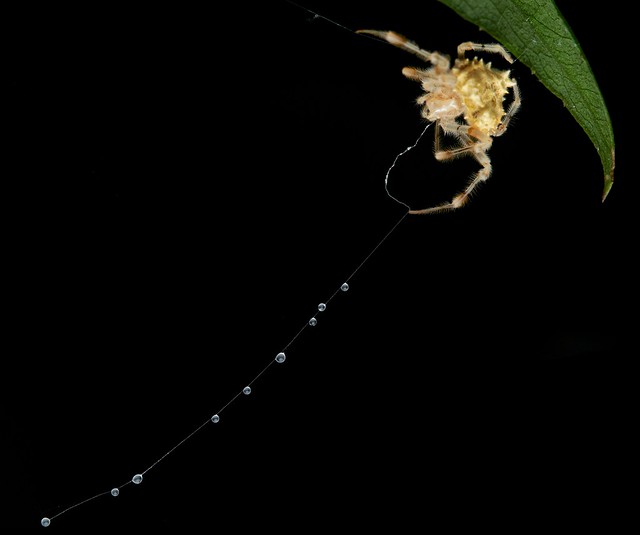 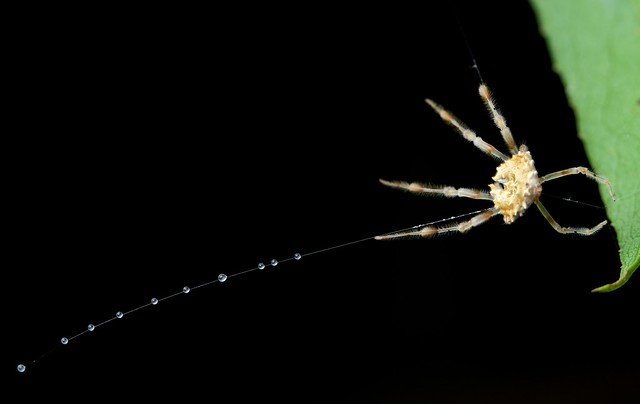 As one might expect from such a peculiar spider, this is not the whole story. Left to chance alone, swinging a single line would be even less effective than casting a line without a fly or bait. However, studies have shown that bolas spiders, on average capture as much as their web building counterparts. How? With perfume. Or rather a sex pheromone. Normally the domain of sexually willing and available females, the pheromone is species specific, and entices male suitors. Wafting on the humid night air, the moths follow the concentration gradient with their ultra sensitive antennae until they reach the source. Once there, they will literally fly circles around the waiting spider, affording several attempts at capture before wising to the spider’s subterfuge. This aggressive chemical mimicry is even more complex than what it appears on the surface. Some bolas spider species (Mastiphora hutchinsoni among others) have been shown to emit pheromones for multiple moth species and adjust the concentration ratio in response to the scotophase (the stage of darkness in a light/dark cycle) and resultant activity pattern particular to each moth species. How such a complicated strategy has emerged is truly a wonder of nature. One hypothesis is that the pheromone analog is actually derived from a native pheromone used by the female bolas spider to attract the much smaller males, which would otherwise have difficulty finding her. However the mechanism behind the development of multiple pheromones and the ability to adjust their concentration ratios remains baffling.

Hunting strategies seem to vary between the three genera of Mastiphoreae. “Mastophora holds the bolas stationary with a front leg until a moth approaches, and then cocks the leg and swings the bolas towards the prey with a rapid pendulum-like stroke. Ordgarius begins to whirl the bolas rapidly when detecting an incoming moth. Cladomelea akermani whirls the bolas immediately after it is prepared for about 15 minutes, even when there is no moth present. Ordgarius sometimes has smaller droplets above the terminal one, whereas the other genera produce only one terminal globule.”(Unreferenced Wikepedia note).

Like most of the araneidae, bolas spiders have poor vision, instead relying on the vibrations from the beating wings which are picked up by pressure sensitive hairs (trichobothria) which line the legs. Once the bolas makes contact with the moth, the sticky globule(s) sink and spread over the scales preventing escape through their release. The spider then gently reels up its prey and will either feed or else tie up its prey with a different form of silk and produce a new bolas to continue hunting. On the occasions where hunting is unsuccessful, the line is brought in and consumed.

It would be interesting to trace the emergence of the bolas spiders and the selective pressures which have led to the secondary loss of a web building habitus. One might think that the ability to emit a species-specific pheromone evolved first and then the abundance of prey led to the dispensation of expensive silk production in a gradual and/or episodic evolution towards its current hunting strategy. However, this view is complicated by the the fact that standard webs are not effective at catching lepidopteran prey short of entanglement. The wings of butterflies and moths are covered in delicate overlapping scales which are readily dislodged upon even the slightest contact, something which is exacerbated with frantic flapping. Therefore when butterflies and moths fly into a web, the web adheres to the shed scales, enabling escape for the majority of subjects. This might indicate that the web building stratagem was lost first, followed only later by complex pheromone mimicry. This would imply stages in bolas development (or reduction in web design) were probably present at one point or another and that such a means of capture might have involved less specificity in terms of prey.

This wonderfully intriguing spider undoubtedly has more secrets to reveal though finding them might involve a bit of fishing.

Bolas spider in action begins at 3:00 (David Attenborough’s “Life in the undergrowth”.

2 Responses to October (The Bolas spider)