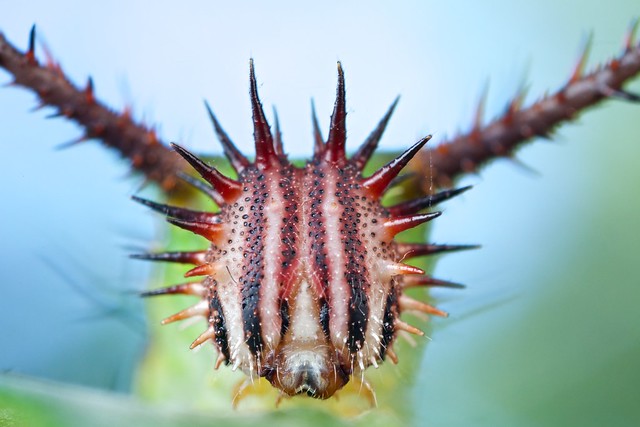 As I step off the bus and head towards the airport terminal, the traveller’s platitude echoes in my mind, “A journey of a thousand miles begins with a single…” – Of course I’m unable to finish the thought as I tug my bulky bag from an overhead bin and swing around, unbalanced, trying to right myself in a flailing maelstrom of straps, zippers and limbs. In so doing I whip some poor bystander in the face with one of the buckles. He goes down (with in my opinion altogether too much moaning) and I quickly follow (sans moaning) buried under the weight of my bag. It’s a rather inauspicious start and if I were one for omens I would probably cancel my trip then and there. However, I pick myself up, apologize profusely, and scurry off, taking flight before even boarding the fist plane.

Omens, portents, signs…It’s a good thing I pay them no heed since it doesn’t take an augur to infer the worst from my turbulent start.

Now, I take a deep breath, open the door to the hostel and look out. It’s early, but the street is still thrumming with activity. I am afforded 1, 2, 3 lingering seconds before I hear a call over the rumba rythms, blaring Bob Marley and riotous cacophony of the street. It’s distant at first, but as it is picked up by others it becomes readily discernible, “Mzungu” – or ‘white person’. I have not been in Africa long, but I already know that the word is not simply a call to get my attention, but also a call to arms to every hawker, tout, taxi driver, vendor, shoe shine boy, beggar (armless or not) and butcher that fresh meat is on the table.

The sound is a starting pistol and I’m off. I walk hurriedly down the street. To run would draw too much attention to myself but too move too slowly would be just as perilous. I walk the line. However, to call an African ‘sidewalk’ a line would be as accurate as calling their potholed, serpentine roads the Autobahn. There’s a passing resemblance to a sidewalk, if you squint, actually maybe it’s better if you just close your eyes altogether. I deftly maneuver open sewers, dodge refuse thrown from the tenements above or the shopkeepers below and sidestep wandering city dogs which growl uneasily as they pass me by. I am moving briskly but suddenly stop at the edge of the curb, my hands windmilling to keep balance before falling precipitously 5 metres or more over the edge and into some kind of un-signposted city works project. I glance behind me and see that there is still a ragtag assemblage in tow. Their numbers have swollen. I wipe the sweat from my forehead with a twist of my cap as I gaze up at the sun peeking over the brow of old, withered and decrepit buildings. They are almost upon me now. It is at once a marathon and a gauntlet that I am running, complete with the same vacillations between struggling onward or surrendering in defeat. I jump several feet across the narrowest section of the pit and land on the other side of the road that still looks like it has some integrity and continue on. “Mzungu!” I look back and for one shit-inducing moment I see a car baring down on me. It has swerved across the street and onto my side of the road, partly working its way up onto the ‘sidewalk’ to avoid a pothole. I stagger out of the way as the car speeds by without so much as a courtesy of a horn blast. I stick the landing in something unpleasant and sticky, and move on imagining a panel of judges holding up scoreboards as I continue to navigate the rat maze of Dar Es Salaam’s streets. I want to take a break from the relentless heat, but there can be no blending in, no camouflage for me here. Ahead of me there’s a small crowd and I wonder what challenge I am to face now. I join them and see that water has inundated the street. A broken main, perhaps? I pass mobile store stands shored up on the driest portions of the road like marooned boats. “Mzungu!” The single cry from behind is a pebble hurled, followed by “Mzungu, mzungu, mzungu”, the sound of the ripple through the crowd. “Does it ever end, will I have no peace?!!!” I glance around and then duck into a blessedly inconspicuous shop to buy some water and fortify myself. I’m close now. I gaze outward from my post looking both ways and then abandoning all protocol jog the last few hundred metres to catch the bus heading to Udzungwa. These last few hundred metres are the hardest and I brush back the ticket scalpers and flycatchers (so called because they catch the unwary and bring them to agencies where they receive some form of percentage, incentive or kickback) which have gathered into a swarm. I push through the throng knowing that I’ll get the most reasonable price (though still at a markup) and a genuine ticket (counterfeiting is rife) at the booking offices. I’ve made it to the offices, if only just… Security posted at the door pushes away those that would follow me in and I can hear their howls as they spy me through the windows handing over my money and annihilating their last chance of swindling, grifting, and/or cheating me. They turn away already spinning new, more intricate webs. There will always be other flies.

In broken English the ticketing agent directs me on a hand-drawn map of the station where to go. My bus doesn’t leave for another 4 hours. I groan inwardly and then outwardly, but am told there is a waiting area free of disturbance. I make my way there and to my surprise it is relatively peaceful. I still fend off the occasional vendor or flycatcher, but here their attempts are half-hearted, they know that most of the people waiting are passengers that already have their tickets. I am able to set my bags down and though I maintain a vigil over them I feel like I have made it through the worst. Now I write in my journal, and will the hands of the clock to move faster. I cannot sleep nor can I allow my eyes to stray too long or too far from my bag. I do some mental jumping jacks, examine the people in the room (while not allowing my gaze to rest too long on anyone so as not to serve as an invitation) and allow myself to imagine the fertile photography grounds ahead. The hours pass and finally I break off a half-hearted conversation I’ve been having with a leper boy to eagerly board the bus. I stow my bag, and settle deep into the seat. It’s not particularly comfortable but I rest easy knowing I have a direct bus, and for now no longer have to worry about the outside world. The bus is my world now and I allow myself to be lulled to sleep by the gentle whir of the idling engine…

And then I hear it. Close, almost a whisper in my ear. The breath is rank and humid on the nape of my neck and I shudder. “Mzungu”, purrs a man with fermented breath and a slowly spreading smile across sugarcane-rotted teeth as he sits down next to me. I slowly turn around, seeking to push myself deeper into the corner of the already impossibly small seat. A whimper and an involuntary convulsion runs through me at the thought of the 7hr bus ride ahead…

1 Response to The Great Race