How I shoot Macro

A photographer, at least one who seeks to constantly challenge oneself and not stagnate, must constantly experiment; incorporating new techniques and new technologies to push themselves, and the craft as a whole. While it can be inspirational to look to others, especially when first starting out, finding one’s own style should always be the ultimate goal. In the current climate of today’s professional photography scene, the photo that shows up on the page is as much a result of one’s ‘in-situ’ efforts: the camera settings, flash positioning, and subject framing/manipulation, as the post-processing that comes after. The most recent addition I’ve made to my post-processing workflow, and which reverberates back up the chain of my workflow, is the addition of Ethical Exif (EE), which takes the form of a simple watermark and a legend included in the caption. This addition has forced me to follow stricter personal guidelines to minimize my interaction/manipulation of the subject for what I feel is a more ‘authentic’ photo. A more in-depth discussion of EE can be found HERE.

Since I have already covered in a fair amount of detail my shooting practices in Tips, Tricks and Techniques, here I will simply focus on the aspects where I feel differentiate me from most other shooters.

1) I freehand most of my shots. This means that not only do I not use a tripod, but I also don’t use a lot of bracing techniques, holding onto a leaf and resting my lens on my hand, or holding a pole with the same hand as my camera. All those techniques stabilize the camera. I am able to freehand up to the maximum 5x magnification on my mpe. But this requires 1) a lot of patience 2) A lot of out of focus frames 3) You don’t always get the exact framing that you want 4) You need to take a LOT of pictures to get one that you like. With all these cons, you wouldn’t be remiss in asking why I don’t change my shooting style. Well, 1) I like the freedom of being without some form of support. 2) It is good practice for when you don’t have any supports available eg. you’re on location and can’t find a good support stick. 3) This enables you to shoot at a distance, extending your arms and using liveview mode. 4) It allows you to shoot in different environments, I can shoot almost as easily in a tree, in the water, etc. as on the ground. 5) In the jungle I try and minimize what I carry around with me, a stick is one more thing I don’t need. 6) A stick or pole is just one more thing that you have to pay attention to. If it slips, or is tilted at a bad angle this can scare away the more skittish species. 7) Sometimes it can be the only way. A lot of insects will fly/jump away if you touch the leaf or branch that they are on. However, they are usually much more forgiving if you don’t move them and so you can shoot away.

2) I will shoot in all manual mode; from the flash down to all the independent settings. Although it can be hard I try not to get locked into a specific configuration, I force myself to use an incredibly varied range of settings and I will often shoot the same scene at different ISOs, apertures and shutter speeds. For example, by using a larger aperture and rolling a leaf, the edge can fade away, leaving a smooth green foreground.

A good setting for beginners is ISO 100, 1/200sec, f/11. However I find that this doesn’t give me enough natural light, and I’m actually not a huge fan of front to back sharpness (see tips, tricks and techniques for an explanation on planes of focus and the advantages of a non-uniformly sharp image). If there is a chance to get more natural light into a scene I will use a lower flash power as fill, bump up the ISO (on a APS-C sensor you will start get grain and significant IQ loss after ISO 400 which is why I have since abandoned crop sensors and shoot only on full frame (5DII/5DIII/A7R) which show stable quality up to about ISO 1600), lower the shutter speed and play with the aperture as necessary.

3) I try and look for interesting compositions and try to get a least one shot from an angle I’ve never tried before on each shoot. This isn’t always successful but it makes you flexible and it helps keep you from falling into a pattern of always getting the same old stuff by which your ‘style’ is generally known.

Ant mimicking Alydidae nymph. This is one of my more normal compositions, a profile shot, showing the flower it is resting on to good effect. However, let’s try something different and see if we can’t add a little dynamism which I feel is lacking here.

Here is an Alydidae adult resting on a flower. The overhead angle isn’t one I usually use, neither is positioning the insect in the centre of the frame. However, here I think that the two work. Iwokrama reserve, Guyana.

I have a few favourite positions for different critters, but that doesn’t stop me from trying something new for each of them. I shot a wood louse and after doing all the usual for 15 minutes I struggled to get underneath it, and got an unusual angle from the bottom.

Wood louse on grass. Now there is absolutely nothing wrong with this shot, in fact I really like it. But to me, it constitutes my regular shooting style and angles. A habit I try and break every shoot. Kurupukari, Guyana.

This shot shows the prominent ridges and segmentation and I feel is a very different kind of shot that I am happy with for an altogether different reason.

4) Perhaps most important of all, is that I try and shoot each subject as though it were a professional photo shoot. This means that I take my time, I don’t rush and I don’t walk away until either I feel like I am causing undue stress to the subject, or else I have an image that I am pleased with. To do any less and I feel disappointed in myself and like I haven’t done credit to the subject. This means that I take a very long time, use lots of memory and go through lots of batteries. On one shoot in Cambodia, while trying to photograph an ant-mimicking corinnid spider (Pranburia sp.) I went through an entire 64GB card and 8AA batteries for my flash until finally I was “satisfied”. However, I am never wholly satisfied with my work and this is perhaps one of the driving factors that encourages me to continue to experiment with new techniques, equipment and styles. I don’t want for all the images in my portfolio to have a readily identifiable look that can be associated with myself. I want to be mutable, showcase variety and be known for unparalleled quality and originality. If all this sounds a little over the top its because the moment one settles on “good enough”, is the moment that quality has not become paramount, and that one is not challenging oneself to one’s full capabilities.

This will be a running entry showcasing some stuff that I’m working on trying to hone and make better. Pictures will be of varying quality as I improve or simply decide to abandon a technique or style. The photos under this section might seem altogether ‘normal’ to anyone else, but they mark a departure from my conventional style and hence will fall under experimental for me personally. Each entry will be accompanied by a short blurb on what it was I was trying to achieve. Any advice on how I might improve a particular style or effect would be very much appreciated. 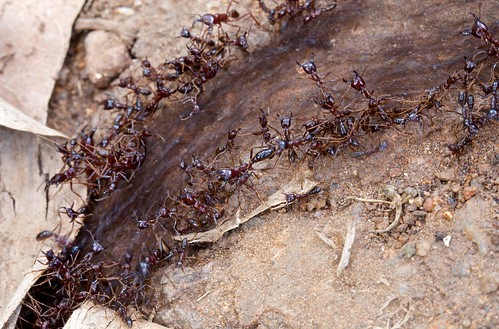 I tried to do a panning shot to capture the movement of the ants. This was made extremely difficult by the low light, the erratic speed of the leafcutters and the slope of the terrain. This is the best of about 200 shots. I plan on taking more because I think that one could get a really awesome shot if one were to get the speed of the panning just right. Tukeit, Guyana.

This was an experiment with light. I had one flash mounted above the subject aimed directly down to light up the watery surface of the leaf, and one aimed directly up from below the leaf, to spill around it and light up the outline of the cockroach. I sharpened it as much as possible in the hopes of introducing halos to further the effect. Hopefully the effect seen is that of a cockroach that appears to be vaguely lit by a full moon.

This shot was taken at night believe it or not. It required mostly just a lot of manual dexterity. I didn’t use flash either! I held the flashlight behind the frog and with the same hand, held the leaf behind it. I let the flashlight shine through my fingers on high power so that it gave the reddish glow. I had to maneuver the flashlight, fingers, leaf all with one hand while shooting with the other. This gave me a uniform reddish glow. Okay, but I want the sunrise! So I slightly splayed my fingers to let the more intense light through, but only at the bottom of the shot. At the top I kept my fingers held gradually tighter. This led to the gradation seen in a usual sunrise. Iwokrama reserve, Guyana. 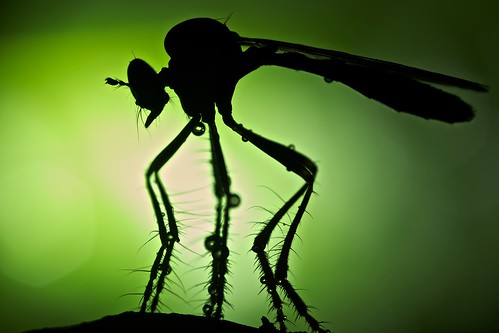 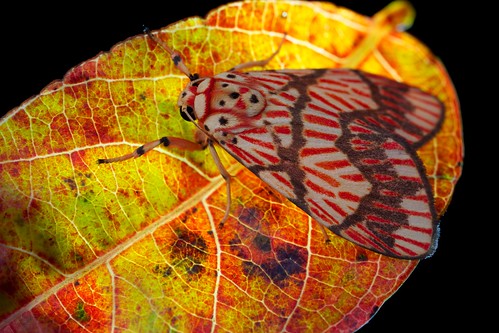 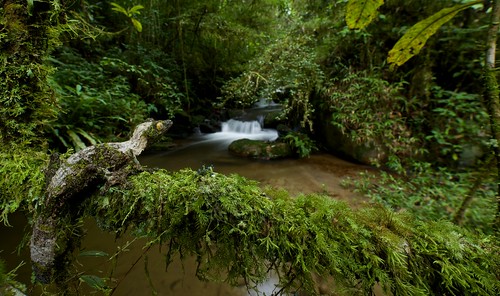 Flashlight by night from different angles 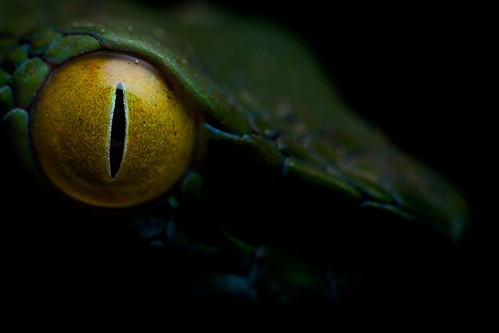 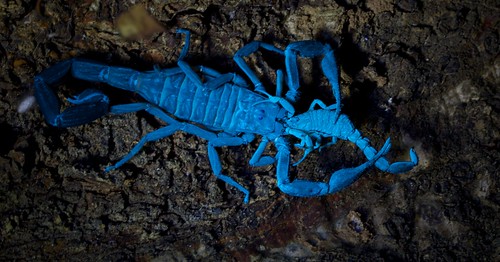 3 Responses to How I shoot Macro