A few days have passed and the memories of the cold, wet, leech filled nights and the nightmares they engendered are becoming less vivid. A lovely short hike with mercifully cooperative weather to Danau Gunung Tujuh (7 mountains lake) has also helped ease my recovery. Gunung Tujuh in addition to being a beautiful volcanic crater lake in its own right is also interesting in that it harbours several endemic species of Nepenthes or pitcher plants. I have always had a passing interest in these fascinating plants (Flickr set), however my interest peaked when I found a book by Charles Clarke on The Nepenthes of Sumatra and peninsular Malaysia. Moreover, it was a book personalized to the guesthouse owner with whom he stayed while writing the book. Upon flipping through it and seeing all the Nepenthes native to the region, my lethargy, apathy and self-pity dissipated and I immediately wrote down all the places I could potentially visit along with their attendant Nepenthes species.

These carnivorous plants have evolved to capture insects and other organic material by means of modified leaves. The traps or pitchers come in a wide variety of shapes, sizes, and colours but are effectively all designed for the same purpose, nutrient capture. Contrary to popular belief this is not limited to insect or prey capture but can include nitrogen rich animal excrement (N. rajah is thought to specialize in this form of capture) as well as leaf and plant litter (N. ampullaria). Nonetheless most pitcher plants do have extrafloral nectaries or a glandular crest located underneath the lid or under the peristome (lip of the pitcher). This secretes sugary nectar which in turn attracts insects looking for a rich energy source. Recovering the nectar is not without its dangers however, as the nectaries are often surrounded by cells exuding wax which creates a slippery surface with perilous footing. Alternatively extremely delicate plant cells which flake and break off in contact with external pressure are also used by some species. Additionally the peristome of many species is composed of sharp downwards pointing spikes which effectively prevent the retreat of flightless insects that have ventured too deeply into the pitcher. N. villosa and N. edwardsiana are especially known for their vicious looking peristomes. 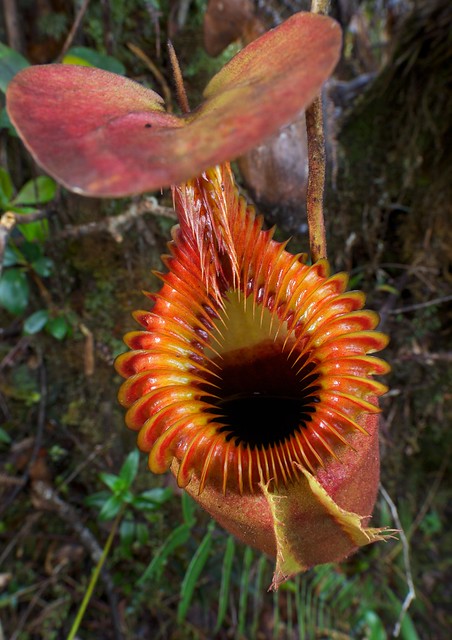 Once prey has fallen into the pitcher, a combination of pitcher fauna and an enzymatically rich fluid digest the hapless victim.

Pitchers in addition to serving the plant also serve a variety of other species and act as microcosms, with dozens of species being recorded living on, in and around the pitchers. These so-called in-fauna can be either symbiotic or commensal (neither providing a benefit to nor harming the host plant) though are rarely parasitic. The most extreme example of the former habit is N. bicalcarata and Camponotus schmitzi ants, brilliantly documented by Mark W. Moffett in a photographic account in his book Adventures among ants. In brief, the tendrils of N. bicalcarata are hollow and provide a home for the ants which are able to scale the pitcher walls, swim and even dive into the fluid at the bottom of the pitchers in order to retrieve fallen prey. The apparent benefit to the plant is that the pitchers are cleaned of detritus and thus the lifetime of each individual pitcher, which represents a significant investment in energy on the part of the plant, is prolonged. An example of a pitcher commensal is the crab spider Misumenops nepenthicola which make their home under the pitcher lid and feed on insects attracted to the nectaries. They have even been known to lower themselves on silken guidelines down to the bottom of the pitcher, and dive into the fluid to capture mosquito larvae and other pitcher in-fauna.

One of the the most fascinating and bizarrely shaped of these plants is the Sumatran endemic Nepenthes aristolochiodes and the reason behind my hike up to Danau Gunung Tujuh. It is named after the flowering aristolochia due to the pitchers bearing a passing resemblance to the vine’s trumpet shaped flowers. Known from only 3 locations in the Gunung Tujuh area and with only a handful of plants at each location, N. aristolochioides is critically endangered. Not only from encroaching habitat destruction, but also from Nepenthes collectors who prize this rare and difficult to grow species and clumsy tourists who trample the plant.

My guide and I hiked several hours beyond where the trail ended. Ducking around fiercely spined palm leaves, scrambling up muddy slopes and darting past the odd wasp nest. Along the way we saw the more common N. gymnanphora, a ground dwelling species. However, impending rain clouds and the ever present clouds of biting flies ensured that I didn’t stay long. Also the light under the forest canopy wasn’t ideal and I wasn’t yet prepared to take out all my accessories and set up shop here. No, I would save that for the ‘mission objective’. I made a mental note – “I’ll get you later” and continued the hard climb ever upwards.

Another half hour later and my guide stopped in a brighter area with stunted trees, the top of the mountain. “Taman anggrek” he called it or “the orchid garden”. Here, in the rainy season there would be a profusion of flower spikes from over a dozen different species of orchids. More importantly for my purposes though, it was also home to N. aristolochioides. I waited impatiently as the guide disappeared into the bush. He re-emerged several minutes later, eyes downcast and shaking his head. “They used to be here” he said pitifully. I could feel myself wilt a little, all that effort, the biting flies, the twisted ankles and thorns in my side was it all for nothing? There was no anger, just a kind of impotence which began to coil around me, threatening to swallow me whole like an anaconda (which incidentally I have also searched for in vain under circumstances not altogether dissimilar from these). “There’s another place though…” he again disappeared for another 5 minutes. I felt the coils loosen a little, giving me a breath of hope. My mind tumbled over possibilities. Had he been so shamed that he had simply run off rather than admit that he had been unable to find the plant?

But he soon reemerged with a look of sheer triumph and redemption. “Come, come!” he beckoned. I ran forward as though they would disappear like some ephemeral dream at any moment. “Here, Here” I heard from up ahead. “Where?” I called back trying to keep the desperation (which takes on a pre-pubescent squeak in my case) out of my voice. “Here” he called again.  We Marco Polo’d our way forward until I made it to a bright, sunny clearing where the stunted trees yielded little shade and the larger shrubs took over. And there flashing in the sun were was Nepenthes aristolochioides!

Similar to N. campanulata and other rare species that are sometimes recorded from only a single limestone/sandstone outcrop or other extremely specific microenvironment, N. aristolochioides is restricted to a strict altitudinal range and is found on sheer cliffs and outcrops. Here, the pitchers are exposed to the sun which creates a bright patch on the upper surface of the ‘head’ and back of the pitcher away from the mouth. Much like how insects and birds are attracted to the windows in a home which offers the promise of freedom from their entrapment, the bright patch created by the sun creates an area of translucence, a false promise. Here, insects, especially of the flighted variety beat themselves against the walls in desperation and futility until they exhaust themselves and fall into the fluid awaiting below where they quickly drown.

Nepenthes aristolochioides backlit by the sun illustrating the translucence which can confuse and disorient insects seeking to escape from the pitcher. During mid-day with the sun directly overhead, the bright ‘patch’ is even more distinct. In the bottom of the pitcher can be seen the fluid level as well as some detritus which has collected. Photo from Gunung Tujuh, Kerinci Seblat national park, Sumatra, Indonesia. Copyright Paul Bertner 2013.

According to my guide even as recently as 2009 there were 10 or 15 plants in a location which now harbours only 2 or 3. He attributed the loss to natural causes such as fluctuating global weather patterns though, as opposed to human interference. However, this loss emphasizes the need to maintain healthy populations in order to buffer such natural losses.

I photographed for the plants for three hours while my guide waited patiently, swatting at the biting flies. Finally it was his pronouncement of rain on the way and the brief downpour which ensued which urged me to finish and pack up. Wet but content the difference in my morale between now and the swamp forests of Ladeh Panjang was immeasurable. I floated down the mountain on a cloud and back to the guesthouse. This time, however, the owner felt confident asking me how the trip went after seeing my beatific expression and backlit, angel-like form emerge from the doorway outlined by the setting sun.